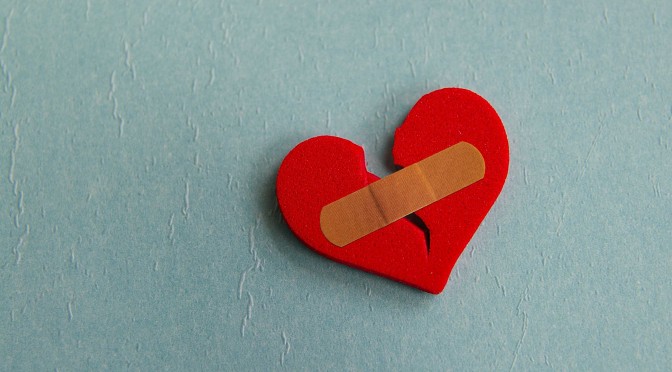 I placed his things in a large Teavana shopping bag: a flannel shirt I once told him he looked sexy in, the photographic print of the Outlaw motorcyclist that I gave to him for Valentine’s day, and the SceneIt Seinfeld edition that he gave to me because I was the only one who could beat him at it.

Brian and I were on the verge of a break up on a night when he would be meeting my friends for the first time. How ironic, right? Did they know it? No. I didn’t want to ruin the occasion.

So essentially we were going to dinner pretending everything was perfect. And then afterwards, I would return things that were his, or things that pained me to keep, but as I looked around my apartment, how could I fit my home into a shopping bag?

The couch we spent countless nights on, watching TV, laughing, kissing, cuddling. The dining table he always wanted to keep clean even though we never served a meal on it. Ever. And the kitchen where he would make his coffee and heat up the water for my tea.

In just a few short months, he had turned my apartment into 850 square feet of memories.

Well, I thought to myself, it’s do or die.

I carried the bag downstairs to my car, placing it in the backseat. There was a nervous churning in my stomach (or perhaps that was just hunger pangs). I wasn’t quite sure what kind of mood he would be in when I picked him up. I’ve learned that he could be unpredictable, that we both could be unpredictable.

I’m not sure what I wanted to happen. For the last few days we had barely talked and I could already feel the void left in his absence getting bigger and bigger, ready to swallow everything else I had built.

When I was a block away, I texted him to let him know I was close. And when I pulled in front of his building, he was already out his front door, locking up and walking downstairs.

“What up,” he said casually. It was a greeting one givesÂ an acquaintance or someone youÂ meet for the first time, not someone you’veÂ shared so many sacred moments with. Memories flashed in my mind: being held in his arms in the warmth of my bed, a bed that we made ours, our faces close together, so close we were breathing each others breath.

On my way there, I had devised a plan. I had a mentor once who said to always envision the outcome before you try to find a solution to a problem. I knew we had to be able to talk calmly and rationally and right now neither of us were in a position to do that. So I avoidedÂ bringing up anything that would sour the mood even more. Like I said to him earlier, I could put asideÂ our bullshit for one evening.

When we arrived at the restaurant, we were the first ones there out of my friends. So we sat down at the table and waited in silence, occasionally looking up to glance at the menu on the wall or check the entrance.

Finally, Steve and his fiancee Stephanie arrive. I think we were both relieved. I made introductions and Brian shook hands and said hello. We were so ready to eat.

Then Briana and Jose arrived last. Brian and I had already placed our order so we went back to our table and waited for the others.

“Well, it looks like you chose a really good place for our last supper together,” he said quietly, arranging his place setting like he usually did. “I guess we’ll be going out with a bang.”

I looked at him. “That’s not what this is,” I said gently. “I mean none of them know what we’ve been going through this past week. I kept that between us. I just want us to have good food and a pleasant evening with hopefully good company.”

It was true. We never really had a chance toÂ actually go out together with friends. We were stuck in this rut where we were doing the same thing over and over and it was driving us mad and making us unhappy.

The evening was perfect. I would periodically look over at Brian to see how he was doing and he was enjoying himself, talking with Stephen about his motorcycle and some of the upgrades he’d made to it over the last couple months. We talked about the boxing match on Friday and about how Steve had proposed to Stephanie. By then, Brian and I were relaxed and happier.

As the evening got later, we all started craving something sweet. Brian wanted to stop by our favorite pizza place and share some cannolis. On our way out the door, we started exchanging goodbyes and hugs and handshakes. I could already tell that the mood between me and Brian had lifted. “I want to drive,” he said, so I handed him the keys and we started walking to the car.

“That was really good,” he said, “Everything was great.”

“I’m glad you enjoyed it,” I said. “I kinda purposely made sure we didn’t talk much beforehand so we weren’t in a bad mood when we got there. That seemed to have worked.”

After a few moments of driving, I decided to take the leap. “You know, I just felt blindsided. Just out of the blue you were changing our routine and you weren’t communicating with me. You were completely avoiding me and that hurt the most.”

“IÂ barely even knew what I was trying to say,” he said. “And you said some really awful and ugly things too you know.”

“Yes, I know, I did,” I admitted. “I did say those things out of anger and I’m sorry.Â It’s like ever since we got back together, it was all aboutÂ you fixingÂ meÂ to fit your mold. Like you had put me in this corner and you had this life with me and my friends and family, but I was never able to be a part of your life. We always stayed at my place, always met with my family. You’ve never introduced me to your family and it started to feel one-sided.

We continued driving into the night. The pizza place was closed so we ended up at a 24 hour Braum’s by his house where we shared a sundae, half with peanut cluster fudge (my choice) and the other half with mint chocolate chip (his).

It was a critical time in his life. Everything was coming together for him, he just had to focus and be ready for it. I knew he really needed this deal to happen.

After finishing our dessert, we walked around the Fresh Market, looking at the produce and the dairy and stuff. Out of the blue, Brian pulled me into his arms, saying, “Thank you Kris,” he said. “Thank you for all of this.” He squeezed me once more and I closed my eyes and rested my cheek against his chest.

All of the fighting the last few days had led us to this moment, in the middle of theÂ dairy and the ice cream section in Braum’s Fresh Market. I was emotionally weary and exhausted, I felt my insides turning into a puddle at my feet from the warmth of his embrace. I wanted to cry. It would’ve been aÂ final release at the end of a long ordeal. “And you’re not my second mom, silly,” he said. I smiled.

In the car on the way home, we were a block away from his house when he said, “I know I said earlier this evening that this was our last supper, but I’m glad it wasn’t. I don’t want us to have a last supper.”

“Me neither,” I said, smiling.

We parked and he got out of the car. Although he did take his bag of stuff with him, he left the Seinfeld game because he said I was more deserving of it. Plus he wants to be able to play it with me again.

When I walked through the door of my place, my phone alerted me with a text. “That was so awesome Kris. Thanks so much I really needed that. I think you did too. Good job.”

Yeah, I did do a pretty good job.