I’ve known for a while that I needed another worktable in my craft studio, but this weekend it became more and more apparent as I worked on my one crowded table. When I first moved into this apartment, I had two worktables, a printer stand, and a 5 tier shelf. For a while 2 work tables was enough because I would craft and film on one table and then keep my Cricut handy on the other, but eventually my laptop and desktop computer took over one work table, that left me with only one table for paper crafting and no home for my Cricut.

To get me through the interim, I jury-rigged two portable storage drawers and used that as the stand for my Cricut. The more I used it, the more I hated it so I finally decided to break down and buy another table.

Below is what the setup looked like before the transformation: 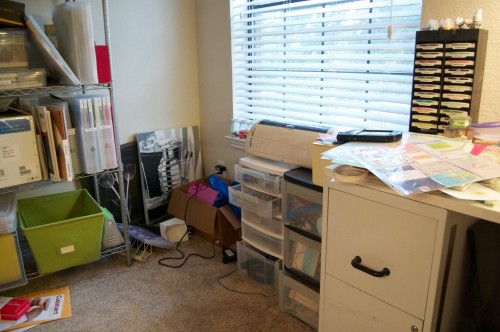 The two drawers differed in height so my Cricut actually sat pretty crooked. In the corner you can see just a box of random stuff (stuff I need to sell or give away), storage items I need to put up, and photos I need to hang (yeah, I’ve lived here for a year and I still haven’t finished hanging all my pictures!) 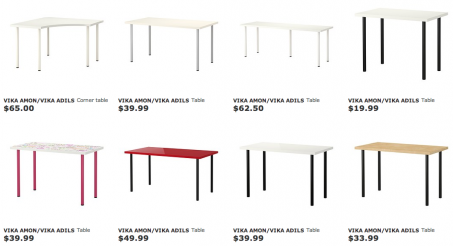 I only live 20 minutes away from an IKEA, which is probably why I continue to live in this same general area, so a lot of my apartment is furnished from there. My craft tables right now are second hand purchases from Craigslist. They are older Elfa desks with two filing cabinets from The Container store and I got them at a STEAL. I settled on the Vika series because they look very similar to my Elfa desks and would fit in perfectly.

The one I chose was pretty basic: a white 47″ tabletop with 4 white legs, grand total of about $34. I was really impressed with the Vika Amon tabletop–it was so unbelievably light weight compared to my Elfa tabletops. In fact, I carried it upstairs on my shoulder without even breaking into a sweat. Granted I don’t know if their lightness is a good or bad thing, but so far I have no complaints.

Also, white on white is just one combination of about a gazillion. In IKEA’s Vika series, you can opt for storage drawers instead of legs; or you can get a glass tabletop instead of a lightweight particleboard like mine. The possibilities are endless.

Assembly is easy as well, and like all assembly, I’d recommend using a power drill. It just makes things go a lot faster. I can already tell that disassembly of this table in the future will be easier compared to my Elfa desks. With the Vika desk, all you have to do is attach the leg base to the underside of the tabletop and the legs screw right in.

For my Elfa desks, the leg bases are attached to the legs, which then get attached to the tabletop. So each time I have to assemble and disassemble those desks, I need to unscrew and screw in small screws. Believe me, I’ve moved these tables twice already and while they’re not difficult to disassemble, it’s not an easy process. 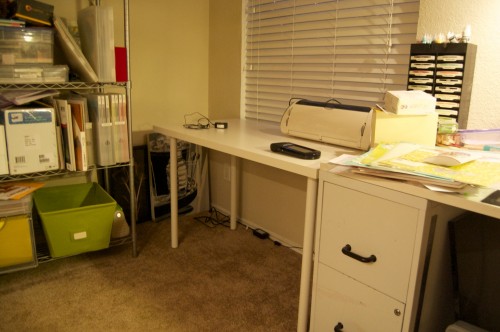 I’m really happy with the outcome. Although there’s roughly a 1″ difference in heigh between the Elfa desk (right) and the Vika table (left), it’s not much of a problem. So that’s one section of my studio. Now to deal with the rest! 🙂