Caroline: Ok cool, I have an appointment at 12 but I’ll come over when I’m done. I didn’t have breakfast so I’ll probably be starving.
Me: I can make a snack. I wanted to try making this baked potato dip.
Caroline: Oh really? Is it from Pinterest?
Me: lol yup!
Caroline: lol 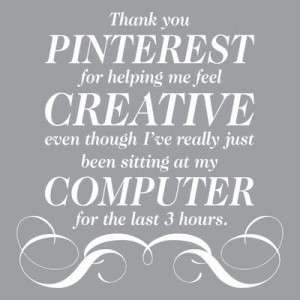 Ok, so I’m somewhat surprised about the recent explosive growth of Pinterest, a new social network that has been around for a while now (in social network terms). However, that being said, I’ve been spending a lot of time on it lately. I like to say it’s mostly for work, but we all know it’s mostly just a harmless distraction.

Unfortunately though, it’s putting a strain on my new healthy lifestyle. How, you ask?

If anything sabotages my diet, it’s going to be the food pins on Pinterest (and surprisingly not the fact that I work above a pizza place). So far though, I’m being extremely good. I’m still drooling over the photos, but that’s all.

Drool, repin for later, and move on.

I still haven’t read the second or third books in the series, although now that I still have the first book fresh in my mind, I’m thinking of reading it while I have a lull (I’m a month ahead on my reading for my book club so I have a few weeks to fit in another book.

I did start reading a book The Queen’s Fool: A Novel (Boleyn)

Â (affiliate link) by Philippa Gregory. I’ve never read any of her books before, but I tend to like period novels like this one plus I’ve heard a lot of good things about her.

Today is just going to be a quick update. I’ll probably post a video update on Wednesdays o stay tuned!