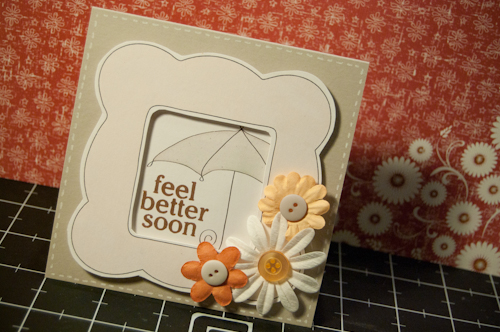 I’m in the middle of one of those spells where I just feel uninspired. For this card, however, I saw a little spark come back just in time for the Jen Martakis Designs Rain Drops DigiKit to go live 🙂

Life lately has been a little bit of everything. I just finished reading this book called The Glass Castle: A Memoir

by Jeannette Walls for my book club. What an amazing story. I can’t believe the things she and her siblings had to overcome like their struggle through poverty and being raised by two selfish parents. It was inspiring and made me think twice about the things I have, and the things I want in life. I often have a difficult time finishing books that I actually read, but this one was easy.

I think I’m ready for a short spring break though. Maybe not a vacation, just some time off so I can do things around the house. It’s weird but some of my best days off are days when I stay home and get things done around the house 🙂

Last week, Kristina Werner featured a Making Memories White Wood Desktop Organizer that she got for 75% off. She planned on using it as an organizer to hold her “new items” that she wanted to try out, which was SUCH a great idea because I often got new items and end up misplacing them or filing them away in their “places” before I even used them. Of course, that didn’t last long because before I knew it, those things were SOLD OUT at Two Peas.

I still loved the idea of having a designated “organizer” for new items that I wanted to use. While I was making my IKEA list, I cam across this MACKIS desktop organizer and became interested when I saw it was 13.5″ wide (PERFECT for 12×12 paper and large sticker packets). It had a wide pocket in the back, a 2nd shorter pocket in the middle, then two corner pockets (great for pens) and a smaller pocket in the middle of the front. Granted it didn’t have the drawers that the Making Memories organizer had, but IKEA does have the FIRA mini chests if you need small drawers. It didn’t have the little metal tag at the side either, but if you’re a scrapper, you probably have a spare one laying around that you could attach using some tools.

On my most recent trip to IKEA, I checked one of these out and figured it was perfect for what I needed so I brought it home with me (see picture). If you can grab the Making Memories desktop organizer at a discount, it would be worth it. But if you’re a little on grabbing a bargain like that one, the MACKIS desktop organizer from IKEA works just as well.