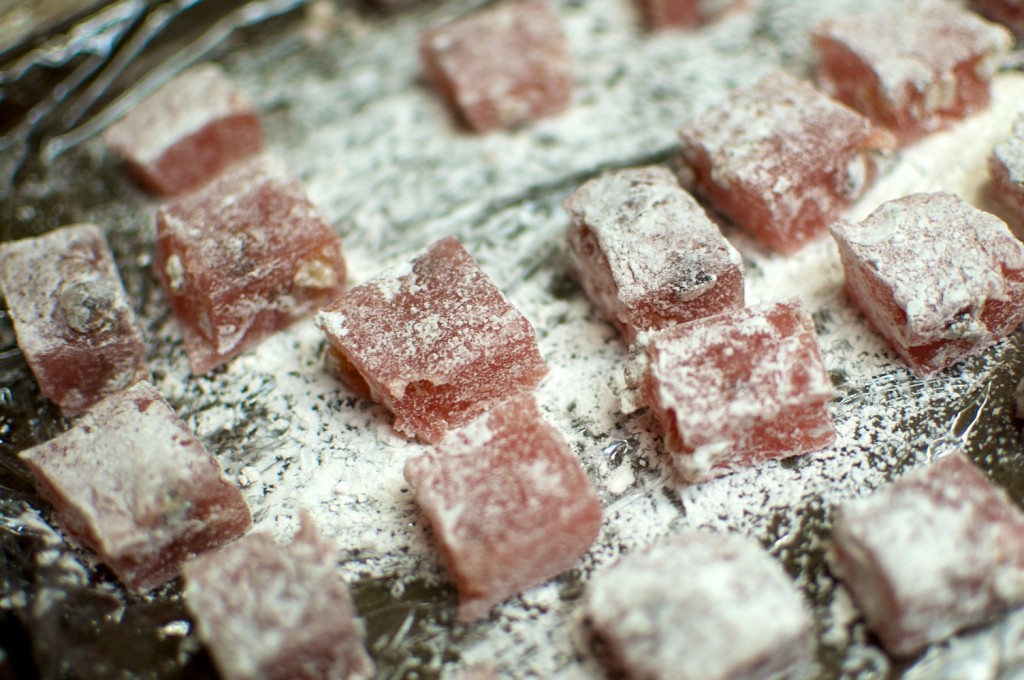 A friend of mine brought back some Turkish delight candy last week from her trip to Turkey. Real, authentic turkish delight: chewy, lightly flavored, and just sweet enough. This particular variety was pomegranate-flavored with pistachios. It was pretty delightful.

After that, I went on a mission to research Turkish delight and candy making in general. Out of all of my culinary exploits, candy making is one of those things that have eluded me. I could never get it right no matter what I tried. My pecan pralines never hardened and my fudge stayed goopy. But after a lot of research, I realized candy making had two ingredients that I lacked: patience and accuracy.

Cooking is easy despite what amateurs may say. There’s a lot of room for error in cooking. Measurements don’t always have to be precise which is why Food Network chefs like Rachel Ray can get away with the “palmful” method.

In baking, preciseness is a necessity. If it calls for 1 cup of cake flour, it implies one level cup of cake flour that’s been filled, not by dunking the cup in the bin of cake flour, but filled by using a smaller scoop to collect the flour and then pouring it into the measuring cup and then leveled off by using the straight side of a butter knife.

Candy making takes baking a step further and requires not only patience, preciseness, but in some cases, knowledge of weather and humidity. Various candy making references even say to prepare candy (especially candy that starts with a sugar syrup) on days with low humidity.

I could talk on and on about some of the stuff I’ve read on the science behind candy making, but I’m going to move on to the more interesting part of this post and that’s the recipe for Turkish delight. The nice thing about this candy is it has relatively few ingredients and steps, but it does require a lot of time (sometimes up to 3 hours from beginning to end, depending on how long it takes for your syrup to reach the required stage) and a lot of forethought if you’re a first-timer.

The candy that my friend brought only had a few ingredients listed: honey, flour, pistachios, pomegranate. In all my online research, I could not find a recipe that called for flour and honey. They all called for sugar, water, and cornflour (some even called for gelatin, but we will ignore those). Evidently, the very first recipe of Turkish delight was based on an Anatolian sweetmeat made withÂ honey or grape molasses (pekmez) as sweeteners and flour and water as a binding agent. However, around 1777, a confectioner changed the recipe to the sugar, cornflour, and water mixture most modern recipes call for today.

I pondered the thought of using honey as the sweetener, but realized that considering the amount required for this recipe, Turkish Delight would truly be a confection fit for a king. Honey can be expensive in large quantities. I saved this thought for another day.

Important: Before even attempting this recipe, READ IT. Know it from beginning to end (this is an old home-ec trick I learned in high school). I give notes throughout the steps to help you. Make sure you have all of the equipment listed. Gather it all up and lay it out on your kitchen counter top. I’m almost never this precise with my food recipes, but because this is a candy recipe, I have to make an exception due to experience. There’s nothing more disheartening than starting a candy recipe and realizing halfway through that you’re out of an ingredient!

For the mix-ins and flavoring 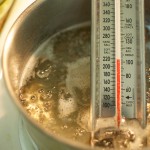 Combine water, sugar, and lemon juice in one of the sauce pans on medium heat. Stir constantly until sugar dissolves and begins to boil. Turn down to low and insert your candy thermometer at which point the sugar will continue to cook at a low simmer. Continue to cook until the syrup reaches 240Â° F (also known as the soft ball stage). At this point, it’s ok to leave the sugar alone and do other stuff, but make sure to check it periodically. Once it reaches 240Â° F, take the sauce pan off the heat and set aside. 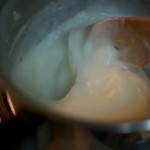 Combine water, cornstarch, and cream of tartar in the other saucepan over medium heat. Stir constantly until mixture thickens to a very thick paste. At this point, I took it off the burner and gradually mixed in the syrup while gently stirring it with the spatula. Some recipes say to mix the paste into the syrup, but common sense tells me that mixing the runny syrup into the paste-like thickener is just easier (like mixing dry ingredients into wet when baking a cake). 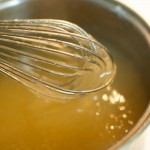 At this point, I switched to the wire whisk, and put it back on the burner over low heat stirring briskly (but not vigorosly! The sugar syrup is still pretty hot and can be harmful if any of it spatters on you). Don’t fret–the mixture will look like runny goop with white lumps in it. Continue whisking until the lumps break up and the mixture thickens to a gel. In fact, at this stage I switched back and forth between the whisk and the spatula just because the spatula was great at getting the starch out of the corners of the pan while the whisk was great at breaking them up into the mixture. I highly recommend doing it this way.

Grab a Book or Your Laptop and Cook for 1 Hour, Stirring Frequently

At this point, keep your sauce pan on low. Continue to cook the mixture and stir it every 1-2 minutes, making sure to scrape the bottom and the corners (use the spatula). I’ve seen other recipes where it says to cook until your mixture turns a golden color, but in my experience, the mixture is already a golden color because the syrup already started to change when I cooked it to the soft ball stage. So I ignored color indicators and just cooked the mixture for 1 hour (I even used a timer!) on low heat.

Actually, if you haven’t already, now is the time to prepare your pan by rubbing the sides and bottom fairly generously with vegetable oil or shortening. 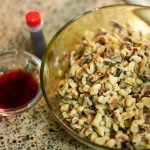 Once the gel mixture has cooked for 1 hour, it will be pretty thick–almost like a jam. At this point, mix in your flavorings. I stirred in the pomegranate juice until it was thoroughly mixed into the gel. Then I stirred in the walnuts and 5 drops of red food coloring (just for more oomph). I continued to stir everything and cook over low heat until it was all thoroughly combined (maybe for an additional 10 minutes).

Where Your Patience Is Tested: Time to Pour and Cool 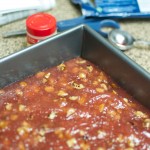 When you’re ready to pour, place your cake pan flat on a trivet (the mixture is still pretty warm at this point and could scorch your countertops if you’re not careful). Armed with the sauce pan in one hand and your spatula in the other, pour the mixture into the pan, making sure to spread it evenly and into the corners. It’s ok to take occasional breaks to shake and tap the pan to make sure the mixture is evenly distributed.

At this stage, it’s important for the candy to cool and set overnight, and then to cure for one more day. We’re talking possibly 2 days total wait time for this stuff. According to my research, curing is important to allow the moisture to distribute throughout the mixture and prevent “sweating.” However, in the meantime, you can lick any remaining gel mixture from the spatula and the saucepan (making sure to wait until it cools thoroughly before enjoying it of course).

Store the pan of Turkish delight in a cool, dry place. Some recipes said to store in the refrigerator, but I opted not to. Refrigeration during the cooling process can cause the moisture to stay trapped rather than evaporate, which is what you want it to do anyway. Instead, I dusted mine with a light coating of cornstarch and lightly covered with plastic wrap to allow moisture to escape while preventing critters from landing in it and getting stuck. Sounds gross, but yes, I prepared for everything. If this didn’t turn out right, it would be because the candy fairies botched the results, not because I wasn’t well-prepared.

Your gel should now be cool and firm to the touch. If you’re starting to see a little sweat appear on the surface of the jelly, or if some of the cornstarch you sprinkled on it is disappearing, time to give it some breathing room. Take a cookie sheet and cover it with plastic wrap. Then dust the plastic wrap with cornstarch. Take a butter knife and skim the outer edges of the jelly to loosen it from the edges of the pan. You may even have to loosen some of the bottom too and lift it up a little. Then carefully turn the pan onto the cornstarch and plastic wrap. You should hear a “plomp!” and see a cloud of cornstarch come out from the edges of the pan. 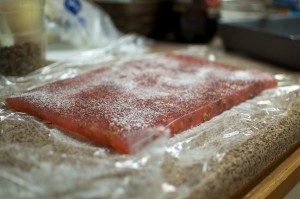 Now the jelly is no longer inhibited by the pan and is free to breathe. Dust the top with a little corn starch and again loosely cover the top with plastic wrap (loosely!). Let it sit for another day (or longer).

Slice and Cure: Stop the Sweating

Once the jelly has been able to sit overnight, start slicing it into 1″ squares. I used a pizza cutter sprayed with a little non-stick spray to do this and it worked well. Space out the individual candies evenly to give them enough breathing room. 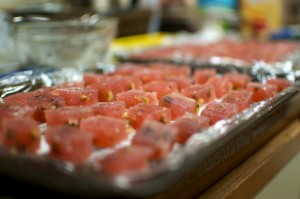 I attempted to coat the squares almost immediately after slicing them and discovered something peculiar: the icing sugar would “sweat” off and disappear from the freshly cut sides within seconds while the sides that had been exposed to air were holding the sugar reasonably well. I think this is where everyone started experiencing the “sweating” problem with their finished Turkish delights. Look at the photo below–can you tell which piece had the generous coating of cornstarch before icing sugar? And can you tell which sides received cornstarch first? 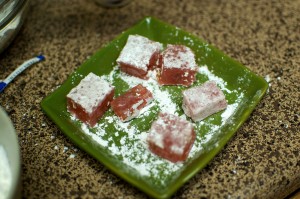 So here’s what you can do to your Turkish delights to help mitigate the sweating. Lightly roll the Turkish delight in about 1/2 cup cornstarch. Don’t pack all sides with it, but make sure it’s evenly coated. Once it’s all coated, let it sit for about 30 minutes to allow the corn starch to form a “crust.”

The Easy Part: Dusting and Storage (Oh, and Eating!)

Once the little squares have had a chance to absorb some of the cornstarch. Dip a handful of squares into the dusting powder, generously coating every side. If you notice the icing sugar disappearing instantly off the sides of the Turkish delight, stop and re-roll them in corn starch and let them sit for another 30 minutes. If you want, you can continue to let the Turkish delight cure after being coated. Otherwise, store them in a container away from moisture (so in a cool, dry place). I’ve read conflicting reports about storing them in air tight containers and NOT storing them in air tight containers. In fact, one recipe recommended them storing them in layers of tissue paper in a cardboard gift box, thus allowing them to breathe and moisture to escape. 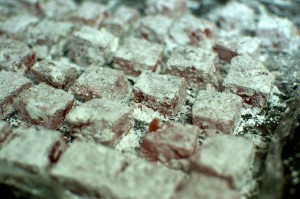 Tips to Prevent Your Turkish Delight from “Sweating”

For Reference and Reading Pleasure

17 thoughts on “My Adventures Making (And Researching) Turkish Delight”