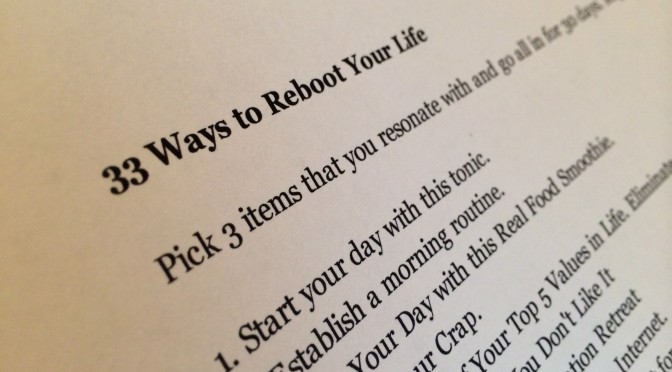 . It’s a very thought provoking read primarily because it suggests doing some drastic things like sell all your crap, quit your job, and go on a 10 day meditation retreat.

There’s a line in it that reads: Whenever you eliminate something, you create a vacuum. Always, always create something new and better to fill the vacuum you have created.

I am doing just that.

I have decided to remove Brian from my life right now. Things were just getting too… confusing and too toxic for me to even think straight when we were together. And even though in my last communication to him, I asked him what he wanted to do about us, secretly hoping he would say something like, “Ok, I’m here for you.” That was 2 days ago and so far I’ve received no response.

And even though my instinct is to immediately ask him why he hasn’t responded, I’m refraining from any contact right now.

I need to focus on one thing and one thing only: me.

I’ve been through breakups before. I know the drill. Fill as much downtime as you can with other things to keep you from picking up that phone and dialing that number. I’m working out again: 15 minutes of intense cardio, followed by 15 minutes of strength training, and then 15 more minutes of moderate cardio. I’m reading and running errands and texting my friends more often. I’m researching energy healing, Vipassana meditation retreats, and yoga.

But despite all of my efforts to fill that vacuum (and it is a large vacuum) thoughts of him constantly flood my mind. It doesn’t help that I am bombarded with reminders of him. Like his stupid shows appearing in my Netflix list. The Seinlanguage book still sitting on my night stand. His stupid French vanilla creamer that he had to have in his coffee every freaking morning. I play imaginary scenes in my head where I show up at his door to desperately plead for him to talk to me so we could end it officially. And then there are the scenes where we meet and he admits his failures and he pulls me into his arms, where my own personal happily ever after lies in the warmth of his embrace.

I miss him so much.

But 2 days apart is an eternity when you feel like you’ve known someone for a hundred years.