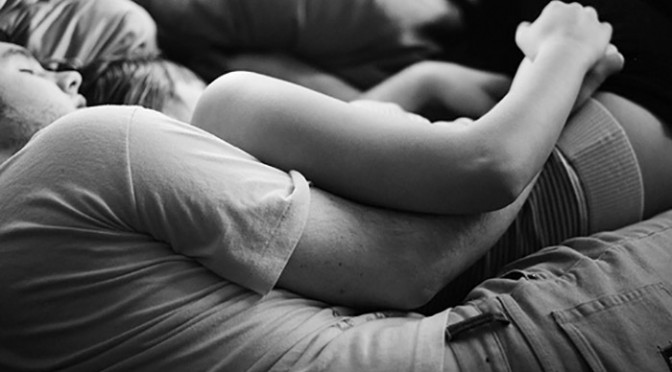 It was early Saturday morning. Daylight was struggling to peek through the light-blocking curtains. Brian was asleep next to me. We were in his bed, back where we began. He was snoring softly, his back to me.

I was here again. Although we had said no more sleep overs for a while, I had given in to him the night before and showed up on his doorstep.

“Hi there!” he said cheerfully as he opened the front door for me.

“Hi,” I said, stepping inside with my overnight bag and a plastic CVS bag. “I had to stop and get some bottled water because my throat was killing me.” I set both down on the kitchen table and I turned to him.

He had his arms open “I missed you,” he said. And I smiled, stepping into his embrace. His towering frame hunched over my petite one, resting heavily on my shoulders. He pulled away just enough to plant a soft kiss on my lips. That kiss…

Back in his bed, he turned toward me, “Hey, what are you doing here?” he said sleepily. “Who let you in?”

I giggled softly. “Whatever, you were the one on the phone last night saying, ‘I misssss youuuu…'”

He laughed. He had a sexy, throaty laugh first thing in the morning. “Yes, I did,” he admitted, planting a kiss on my lips.

Pure bliss, I thought as I turned around and he pressed up against me, curling his body around mine. He buried his face in the back of my hair, mumbling and murmuring incoherently. Within seconds, he was snoring again.

We had spent the night in his bed talking and kissing and cuddling. It felt like ages since we were that close. “How long have we been together?” he asked.

“Ugh… it feels like a hundred years,” I said, laughing.

“A hundred years, she says!” He smiled and he kissed my forehead. “It does feel like it, doesn’t it?”

“Yes,” I said, nuzzling against his neck.

After a few moments of silence, he asks, “What happened to us? Why aren’t we together anymore?”

“You don’t make love to me anymore,” I said.

“I know,” I said. “And that’s what we’re supposed to be doing right now. You focusing on getting your life back together, and me working on… well, me.”

No sooner had the words passed my lips that I wondered if I had made a mistake spending the night.

“Do you even care about me?” he asked.

I sat up and I gazed at him intently, and then I grasped his face between my hands and said, “Of course I do,” I said. “I mean even after all this time, you still think I don’t care about you?”

He looked away. That was it. He was feeling insecure about us, about me. How could this man, this beautiful, incredibly smart, funny and passionate man be insecure with me?

I basked in the replay of the previous night. And although we had talked long into the night until we both fell asleep, I felt we had repaired some bridges.

But I know there would be more repairs ahead if we wanted to stay happy together.