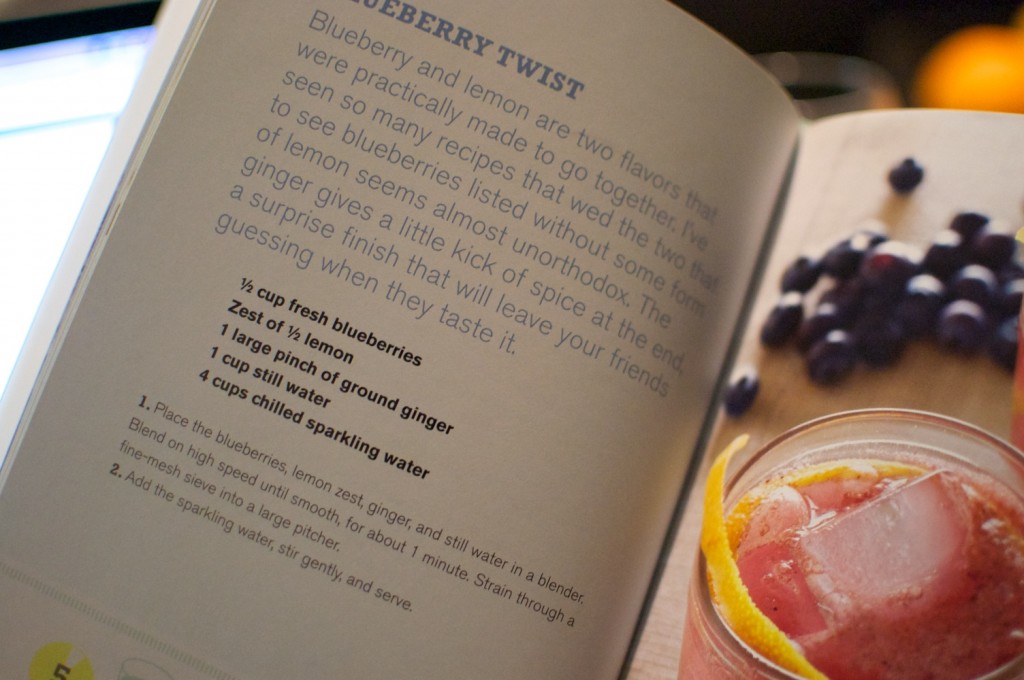 I came across this book a while ago on Amazon and was actually kinda intrigued by the concept of flavored water. Flavored water is essentially what it sounds like: water that’s been infused with fruits, herbs, and sometimes vegetables.

This hardcover book isn’t very extensive. In fact, it only has about 50 recipes so it’s under 100 pages long, but it does make a great introduction to concocting your own flavored waters.

One thing to note about these recipes is it’s flavored water which means it’s generally unsweetened (excluding the natural sweetness from fruits). The first recipe I tried it was… kinda gross. But the more I drank it, the more my taste buds stopped searching for something sweet, and started accepting the flavorful and refreshing flavors.

The beginning of this book has an overview on necessary tools for making flavored waters, most of which you may already have in your kitchen or bar. I also like that each recipe is accompanied by a visual prep time and servings indicator, allowing you to quickly see how long a recipe will take to prepare. For the most part, I thought these were accurate, except for the Watermelon Basil water which took a lot longer and required significantly more muscle to make.

The first recipe I made was called Blueberry Twist, basically fresh blueberries blended with water, ground ginger and lemon zest, strained, and mixed with sparkling water. The blueberries were somewhat tart, but matched perfectly with the lemon zest. I’ve never really been a sparkling water type person, and although this recipe initially made me pucker, I actually ended up liking it a lot in the end.

The second recipe I tried is called Pressed Watermelon with Basil water. This one was one of the more time consuming recipes in the book stating it would take a whopping 15 minutes to complete. In my opinion, I think it took a lot longer, more like 20 to 25 considering all the pressing you have to do. Or perhaps I just pressed more watermelon than necessary?

Who knows. This one was a delicious recipe right off the bat. I’ve heard of the watermelon and basil flavor combination and was always curious how this herb, often paired with tomatoes, would taste with the watermelon. It was also slightly sweeter than the previous recipe I tried primarily because watermelon in general is just naturally sweet.

The third recipe I tried was Rosewater Lemon. Most people may balk at the idea of consuming rosewater, but it’s a fairly common ingredient in Middle Eastern cuisine, specifically desserts and candy. In fact, it’s sometimes difficult to move past the feeling that you’re drinking your mom’s Yardley Rose soap. I actually had rosewater in my pantry after I’d gone through a Turkish Delight-making phase last summer. This recipe is actually quite simple and very delicious if you know where to find rosewater. I purchased mine from Shine’s Market, a Mediterranean market and cafe close to my office.

Rosewater lemon was actually pretty easy to make so I’m going to post the recipe below.

This book is great for the price you can get it at Amazon. If you’re on a diet and want to find more ways of incorporating water into your daily life, you may want to give this book a try. It provides a healthier alternative to artificially-sweetened drinks and drink mixes especially if you’re tired of plain old water.

Summary: A refreshing, flavored water made with rosewater, lemon juice, and fennel